Construction buyers have reported the strongest rise in construction activity since November 2017. 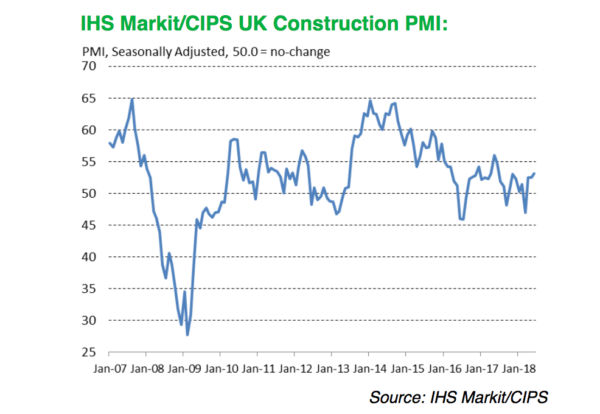 The latest IHS Markit/CIPS UK Construction Purchasing Managers’ Index for June registered 53.1 in June – up from 52.5 in April.

The rise represents the sharpest increase in overall construction output since last November.

New orders also rose at their fastest pace since May 2017.

Residential and commercial work were the main drives as civil engineering continued to plod along.

“A solid contribution from house building helped to drive up overall construction activity in June, while a lack of new work to replace completed civil engineering projects continued to hold back growth.

“Of the three main categories of construction work, commercial building was sandwiched in the middle of the performance table during June.

“Survey respondents suggested that improved opportunities for industrial and distribution work were the main bright spots, which helpedto offset some of the slowdown in retail and office development.

“At the same time, higher transportation costs and rising prices for steel-related inputs led to the fastest increase in cost burdens across the construction sector since September 2017.”

Duncan Brock, Group Director at the Chartered Institute of Procurement & Supply, said: “With the fastest rise in new orders since May 2017, it appears the brakes are off for the construction sector.

“Despite being hampered by economic uncertainty, firms reported an improved pipeline of work as clients committed to projects and hesitancy was swept away.”